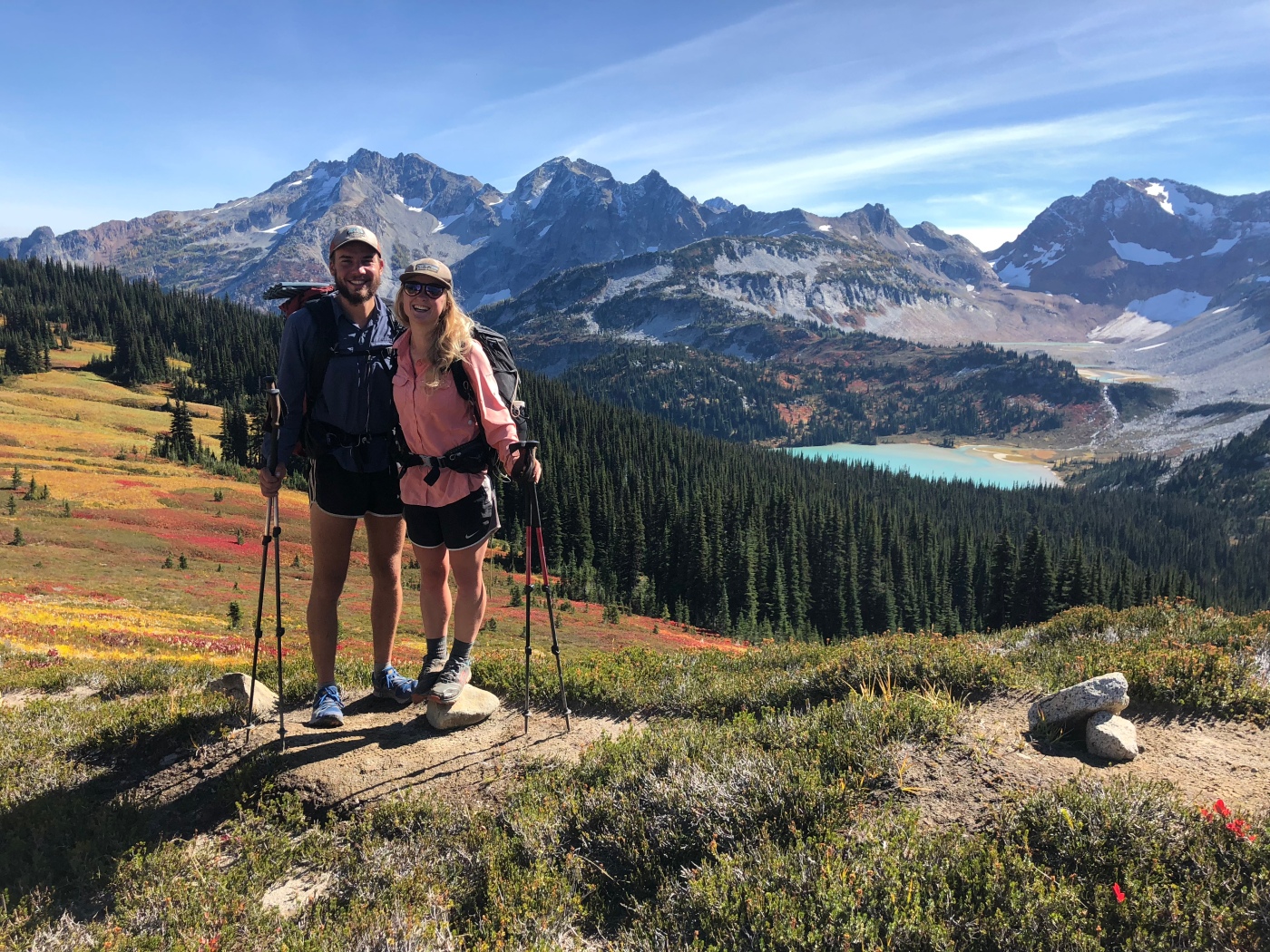 When we arrived at Stevens Pass we were picked up by Tim, Joal’s school friend from Thailand. From here we went into Seattle where we had rented an Airbnb for the next two nights. It was awesome to have a bed to sleep in and we even had a hot tub!

We headed out to explore Seattle stopping at the locks into the city. As salmon migrate through this river there was also a fish ladder next to the locks where we were able to see salmon swim back from the ocean to the rivers they were born in to respawn. This was really awesome to see and there were looking windows where you could see the salmon swimming upstream.

We then headed to some local breweries near our Airbnb including one that was a board game pub. Here we played a game kind of like monopoly but with cards. We then retired back to the hot tub after some Thai food.

The next day after some jobs we headed downtown. Here we picked up our replacement tent and enjoyed the Bay Area of Seattle. At Pike Place, a market overlooking the bay, we paid visit to the first ever Starbucks. Avoiding the queue, we headed to a newer coffee venue called Storyville which served beautiful cold brew and lattes. 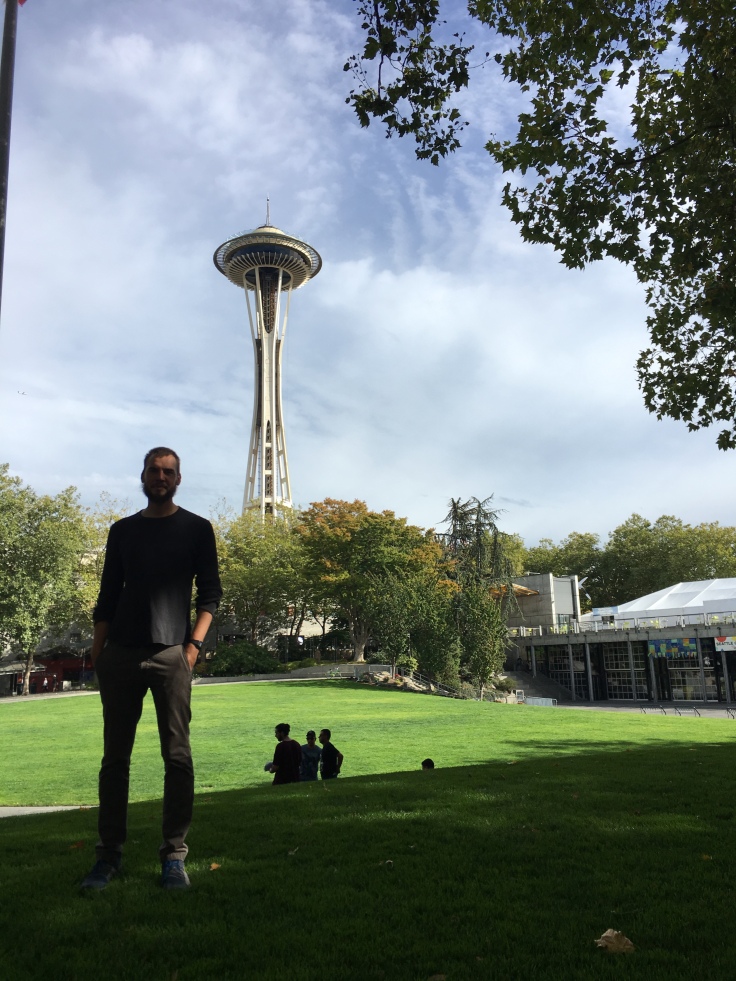 We then explored the space needle which is part of the iconic skyline here. After a visit to the biggest outdoors store we’ve ever been to (4 floors, a bike track and a hiking track) we headed to some more breweries, the hot tub, and then bed.

The next day we checked the weather and were happy to see beautiful sunny skies planned. Unfortunately by the time we hit Stevens Pass it was raining again. We hiked 10 miles and the trail had turned into a river by this point. This was going to be a big test for our replacement tent! Luckily it held up really well giving us confidence for this next section.

The next day was a wash out. We’ve not got any photos from this day as it was so wet that all our electronics and bed clothes were stored safely in dry bags. We only stopped walking once this day for lunch so ended up doing a long day, despite 6000 feet of elevation gain. Knowing how close we were was the main motivation for us, along with the promise of sun later in the week. Whilst the tent kept the inside dry it is inevitable that you are still wet when it rains for two days as your rain gear, bag, socks and shoes start to soak up the water. Putting on wet socks when it is freezing cold is probably one of the worst feelings. The cold also means the tendons in your feet seize up more which meant both of us started to get bad plantar fasciitis again.

Luckily from here the weather cleared, and by the next morning there wasn’t a cloud in the sky though it was still very chilly. The morning felt like we were walking through the set of the Sound of Music. The reds and yellows of the meadows were a reminder that autumn really is upon us now. 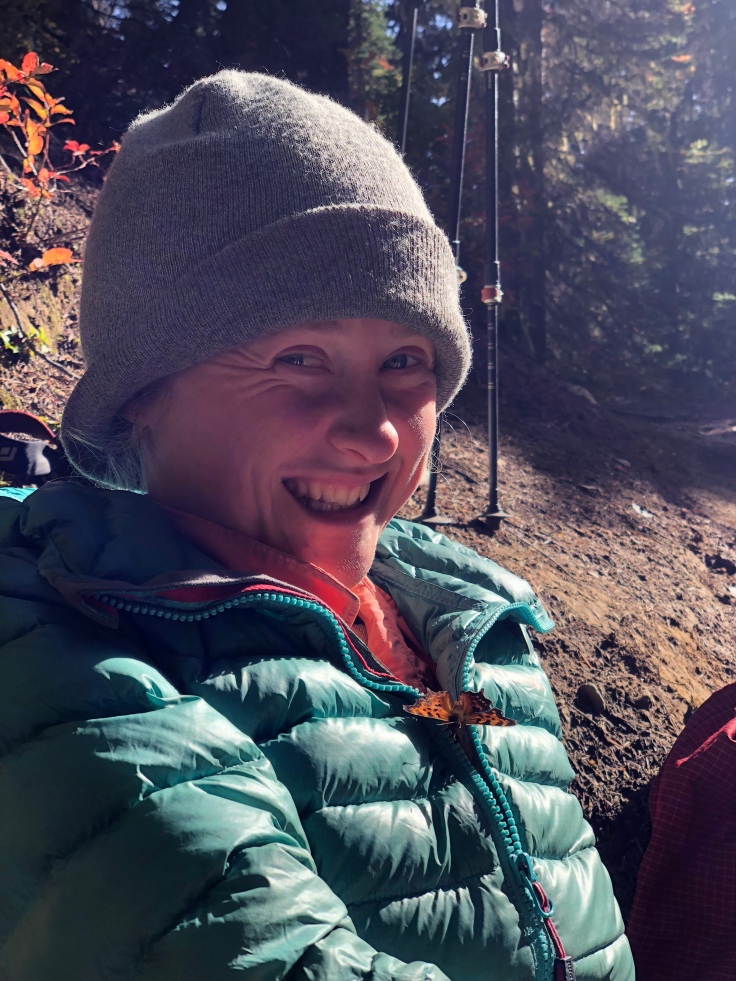 Being at such a high elevation we can see clouds in all the valleys we pass. We could also see all the mountains had received fresh dumps of creamy white snow. After passing the 4000km mark we crossed a downed bridge and made it to a marble blue lake where we set up camp. Here we heard wolf cries deep into the night.

The next day was beautiful. We’d been debating which section we liked more: Washington or the Sierras, but these last few days tipped the balance for us. The colour palette now includes reds and yellows, which paired with the aquamarine lakes are stunning. At this point we hit another fire closure and a detour that took us over a steep pass to Holden village. We had the most scenic picnic we’ve ever had before arriving at a Christian summer camp that was helping host hikers.

From here we had to take a bus which took us to a boat terminal 10 miles away. Whilst waiting for the ferry we took the opportunity to have a hobo shower, jumping into the cold lake.

45 minutes later we were in the town of Stehekin. This town is only accessible by foot, sea plane or boat so amenities were very sparse. This meant that a lot of us had the problem of not being able to buy fuel as they were out. We came to the realisation that for our last few days we would have to eat cold food which wasn’t ideal as the weather looked like it was approaching freezing. This town was also not equipped to deal with the large volume of hikers coming through. We waited in line at the post office for over 2 hours with a dozen other hikers, but on the positive side Sasila, Porche’s wife, had got us a brilliant box of Thai treats, snacks and bars.

We were pretty stressed in this town as we tried to do all our chores quickly after the long post office queue. Luckily the bakery made up for this and we picked up the best cinnamon roles we’ve ever had. They were huge! We relaxed here for a couple hours before hitting the trail for the final stretch! 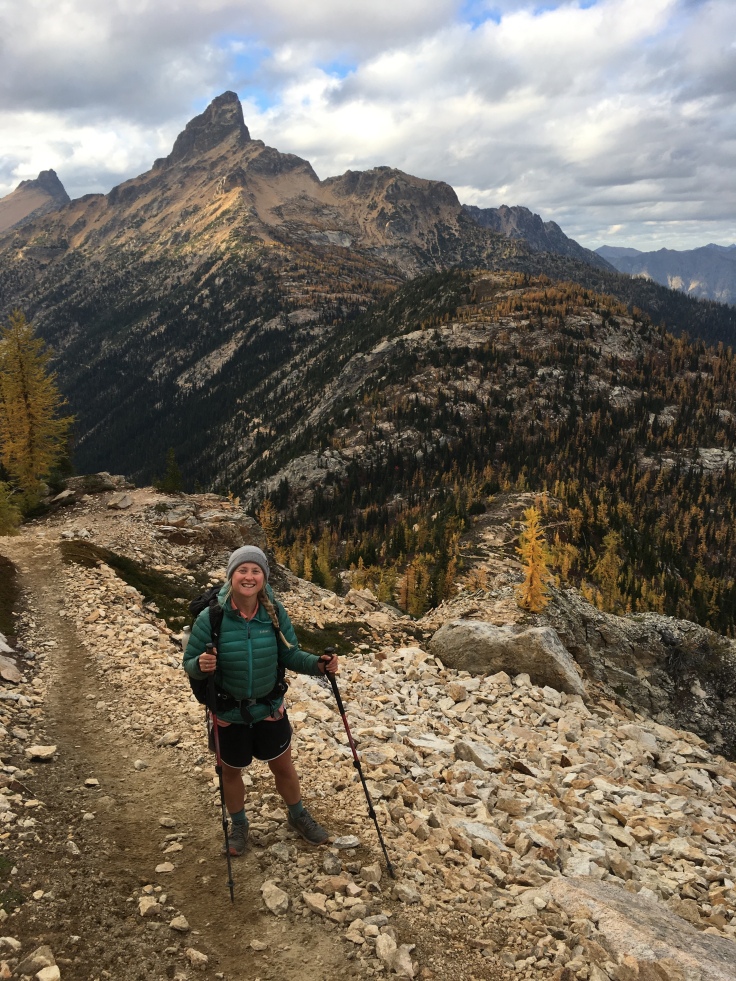 We headed up into the mountains where the temperature started to drop. After a few log crossings and a wasp sting later we arrived at Rainy Pass. For those hikers who got here around August this was the end their journey, as there was a fire up ahead. What was nice to see was that hikers had made a mini monument to celebrate their success. 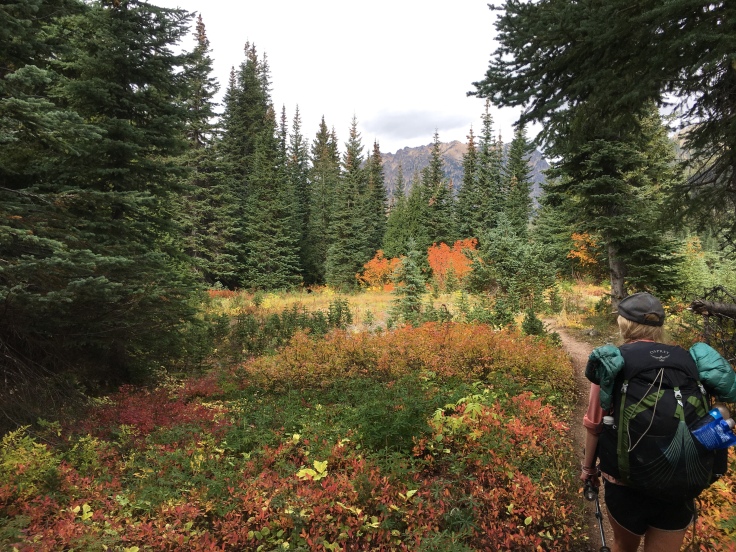 Walking down the trail from Rainy Pass Jen saw something big rustling in the trees. As we got closer we saw a big bear picking berries from branches next to the trail. We slowly walked past but it didn’t seem too bothered with us.

After Rainy Pass we climbed further to another beautiful outlook where views were a 360 panoramic of jagged mountains. Late in the afternoon we approached the 2600 marker which would be our last 100 mile marker. As we set up camp it was bitterly cold with a sprinkle of rain. There were a lot of day hikers who had come up the peak from Rainy Pass. They were so interested in our story and it was the first time we were pumped up by day hikers for almost completing our trip.

The next morning this had turned into snow which meant hiking to keep warm. Lunch was very short as we were freezing so we pushed through aiming to get to the last road in Washington before the border. As we got closer to the road we thought we were hallucinating as we saw a human sized monkey/bear/mouse sitting on the path. 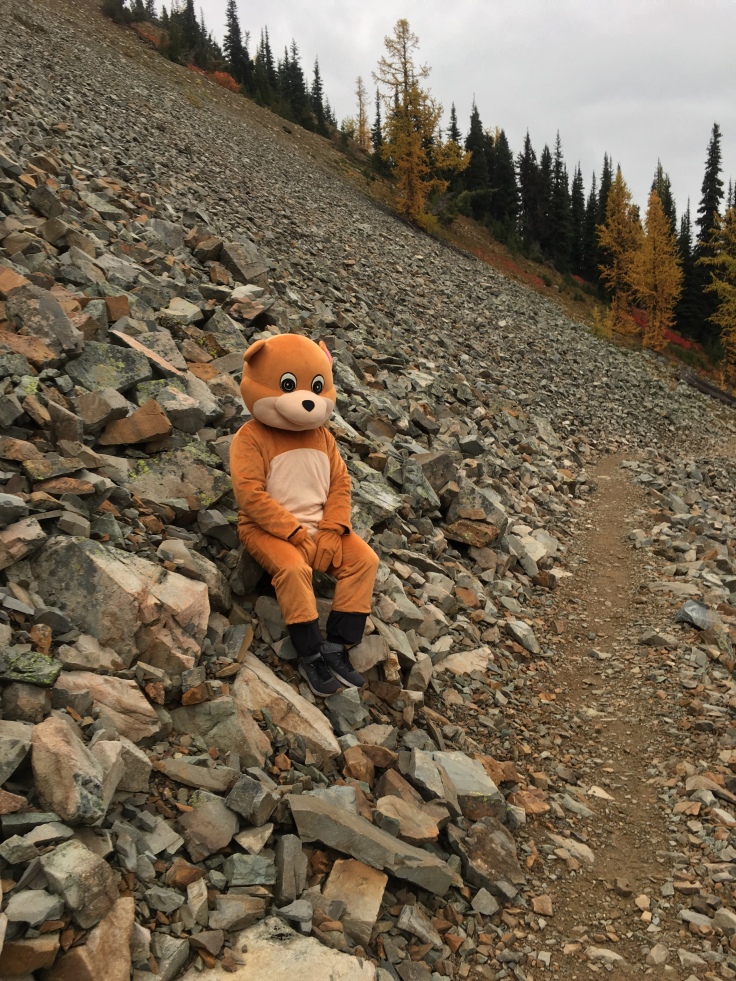 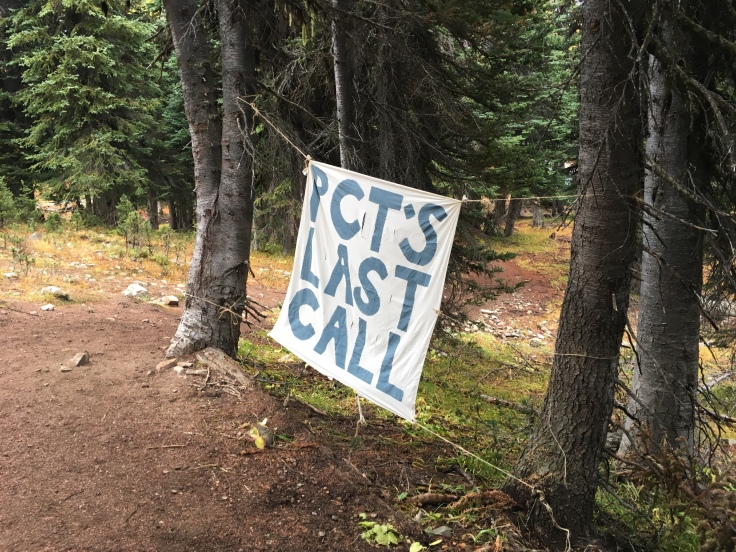 He shouted, “Welcome to the PCTs last call!” This was the most epic trail magic we encountered on the whole trip, made more amazing because of the heavy snow. We were cooked pulled pork and hamburgers, and they had a bar stocked with more liquor than we’d seen in America. The leader of the trail magic was called Animal and he’d walked the Continental Divide Trail in 2004 and PCT in 2014, and when he heard we didn’t have any gas left kindly gave us his can. The night ended with glow sticks, a guitar and a sing along.

We slept under the tarp they set up which was just as well as in the morning we had 4 inches of snow around us. We walked up to Hart’s Pass, the highest road in Washington, where Jen made a snowman with all the fresh snow. We could also see deer tracks on snowy trail. From here we took our final fire detour and dropped down into valley where we were met with rain rather than snow. It was crazy to think this would be our last lunch on trail. The weather was bitterly cold but knowing we had a day to go made it much easier. 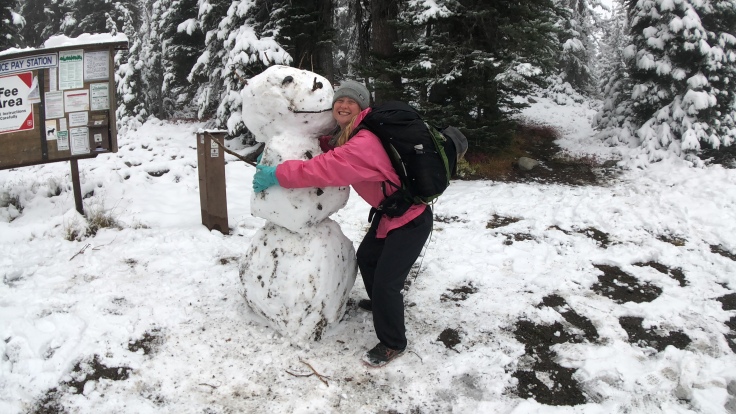 We set up camp 12 miles from the Canadian border in the snow. This was definitely the coldest night on trail. Taking off frozen socks was a challenge and so was standing out in the cold to make our dinners. We got into our quilt and made sure to tuck in the sides to rough out the last night on trail.

This last section was the most beautiful section of the whole trail. We saw Washington in sunshine, which showed off its beautiful lakes and autumnal colours, but we also got a taste of snowy Washington. All things considered we think we timed our end date perfectly so that we experienced all Washington has to offer.

Hiking into year 8 together with @jenral123
Welcoming in the next decade⛷🎉
The tree up and ready. #hostingchristmas #festivefun #hohoho🎅
Last haul of the year 🍅🍅🍅 #tomatoes #urbanfarming #growyourown
Missing the simple life #pct #washington #pcting
Scratching the camping itch with a weekend in #brighton . . . #vango #thetrek #chalkydownscampsite
Follow JWalking on WordPress.com